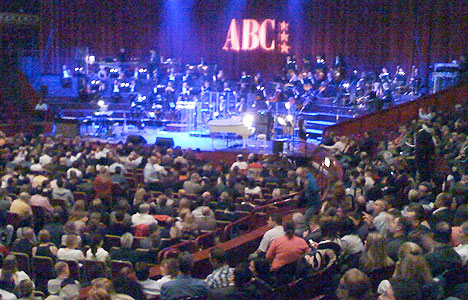 The orchestra arrive on stage before much of the audience!

(Posted from my iPhone on the way home…)
If you’re going to do nostalgia, do it properly. And with this gig, ABC (which is only Martin Fry really) certainly did it properly. The best pop album of the last 30 years – The Lexicon of Love – played straight through, with a complete orchestra …and in the Albert Hall. Could it be any better?

Well yes, actually. Because this turned out to be a real reunion affair. David Palmer (nowadays Rod Stewart’s drummer) back for the first time since the album. Gary Langan on the sound desk. Tessa Niles out of retirement on backing vocals. Anne Dudley conducting the BBC Concert Orchestra. Even a rambling speech from Trevor Horn. And yes, the gold lame suit for the encore.

If the audience was emotional (and it was full of couples who looked like one or other of the tunes was “their song”) then I bet it was an even more lump-in-the-throat night for many of the performers. Sound a bit naff? You weren’t there in that case.

Fry has still got it, no question. The first 45 minutes were spent running through the non-“Lexicon” back catalogue, which contains more hits than you might think. Then after the break, a no-gimmicks run-through of The Album. I’d forgotten how complex some of the songs are, and Fry even looked nervous at times, but he hardly missed a word. And if he had, 4000 fans would have sung the right ones regardless. They loved it. Mrs R said afterwards: “it really makes you realize how second-rate the pop music of the past 20 years has been in comparison, doesn’t it?” and yeah, it might just have been an album which defines a time in our lives, but what a great album to have as our special one. After 27 years, it’s still wonderful to hear “axis” rhyme with “fascist”.

Update: The Lexicon of Love part of the show is on BBC Radio Two on Saturday night (11 April) – don’t miss it.

Thanks to goodgrr for this:


20 Comments on ABC at the Royal Albert Hall review InEntertainment

Wish I could’ve been there… I wasn’t even around when the album came out, but it’s slowly taken over my life these past few months. Do you know if there were any plans to record last night’s show?

I was one of the lucky ones to be there…
It was very nostalgic….and really confirmed to me what I really knew..That the “Lexicon Of Love” Album is pure class and a special one even after all these years!!…..Martin Fry and the band members really looked like they were enjoying themselves!! The Audience Loved it….The setting couldn’t have been better……
A great night!!!!!

Clairey
Hi
I believe that it was recorded and will be played
on Saturday night on BBC radio!!!
It was really good
Lee

I was also there last night, it was fantastic start to finish. What a privilege to witness someone so magical. Album is still one of my all time faves and I never tire of hearing it

Yes! Tell the world – link here by all means – but the Lexicon of Love part of the show is on BBC Radio Two on Saturday night (11 April)

It was an absolutely glorious night with a powerful mixture of nostalgia and soaring strings.

I really enjoyed it.

I was there !!!!!!! Fantastic, took my husband who when this album can out only listened the Clash, Strangles !!!! But he really love it too. I still run to this album 25 years later, what a privelge, THANKS for a great night

I attended the concert at the Royal Albert Hall and it was fantastic.
Martin Fry’s voice is outstanding and having Anne Dudley join in with vocals made it a perfect rendition of the perfect album.
I bought it as a teenager and used to listen to it with my (now) husband when we owned about a dozen records between us, so you can imagine we knew every word last night!

I agree with everyone, indeed was writing about it this morning. “Trevor Horn made it clear that it was a special moment because each component was first class and gelled at the right time – from obvious ones like music and lyrics, to Martin Fry’s awesome voice and articulation and not least the super talented Anne Dudley.

It worked again 27 years later to fill a hall with 4000 people, not due to rose tinted spectacles but because it always was something special amidst a lot of early 1980’s mediocrity pumped up by gloss and video but lacking substance and soul.

It’s all to easy to be pompous about these things but generally the truth will out – gold is gold (literally in Martin Fry’s case as his signature gold suit worked again to good effect during “The Look of Love” yesterday)”.

I flew home on the strength of it and am largely still up there!

Interestingly the otherwise pretty ropey “Music & Lyrics” film with High Grant has couple of pretty good 80’s style pastiche performances which stand out more than the plot. I’ve always rather liked them despite myself and hence was not surprised that it turns out Martin Fry had some involvement in helping Hugh Grant (surprisingly good voice) deliver the goods.

I was also there last night. I loved this album 27 years ago, I listened to it non stop on my Sony Walkman during a week’s girl guide camping trip and it helped me through some difficult teenage years. The fact that it translates so well to the Albert Hall, with full orchestra, is a testament to the quality of the song writing and Anne Dudley’s string arrangements. Martin’s voice was amazing and seemed to be just as emotional as his audience! An unforgettable evening.

Witnessing Martin perform The Lexicon of Love with ABC (great stuff, mr. Palmer!) and the BBC Orchestra was like a 27 year old dream come true. It turned out to be quite a phenomenal night, even with the surprsingly pre-interval part as a sweet bonus. Classic, in every sense. Thankx, everybody!

Was lucky enough to have been there last night and it was an amazing evening. The sound was phenomenal. So lush with a full orchestra and Martin Fry’s voice was still so strong after all these years. I’d always dreamed of seeing the Lexicon of Love being performed live and this didn’t disappoint! Totally unforgettable.

Felt like an historical event, an absolute privelege to be there. Superlative central..

Hello
Listened to the BBC broadcast on BBC2 which was really good….Does any body know if the broadcast can be downloaded to a pc? Transferred to an I-Pod etc….Would be great to have to keep!!!
Cheers

Still on a high from Wednesday! A great gig. privilege to be there.

Lee – Google “Audacity” – a free recording programme – to capture audio from the iPlayer.

love Fry is that gold suit…

It was amazing, from the overture, lump in throat moment… amazing how the lyrics all come flooding back to you 😉
As it was so succesful a night, do you think any chance it could be repeated again, maybe on 30th anniversary !!! this is 27th anniv I believe !!

Mike
Thanks Mate “Audacity” worked a treat..
All the best

I did the I-player listen again thing (was out on Saturday), but is this likely to be a BBC DVD or CD? Hope so – could live without Ms Long reminding me it’s R2 on iplayer now and then, although I understand why.

I saw ABC in a live concert a few years ago and it was excellent – Not one of the Here And Now/Steel City tour type things (although I saw them again in Bournemouth in December), but a proper concert and it’s wrong to write them off as just an 80’s band doing the retro thing, there’s real quality in all of their body of work even if Lexicon stands out.

30th anniversary of “The Lexicon Of Love”