I may well blog quite a bit about the forthcoming General Election, because we’re actually in a very interesting constituency here in Cambridge, which could go one of three ways. And as an “undecided” voter at the moment, I need to do some homework to crystallise my thoughts, and anything I come up with might interest others amongst you too.

The first thing you need to know about any election is what constituency you’re in. Now, you may be thinking “duh, I can get that far”, but these things do change, and indeed, ours has. Like a lot of people on the south side of Cambridge, we traditionally found ourselves not inside the “Cambridge” constituency, but in a far more rural area called “Cambridgeshire South”, which, as you can see in the map below, extended right into the city to the corner of Parker’s Piece, so that landmarks such as the Catholic Church (not that it votes) were outside the city, in parliamentary terms. The blue line represents the old boundary: 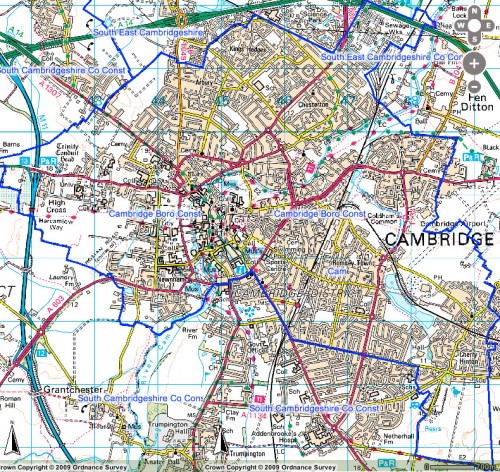 It makes a big difference which constituency you’re in. At the 2005 General Election, Cambridge was a Liberal Democrat gain from Labour, and was rather exciting. And the constituency had returned a Conservative MP as recently as 1987. However, in Cambridgeshire South, you’d be forgiven for thinking your vote won’t make any difference, as the Conservatives traditionally have a huge majority.

However, things have changed. Here’s how the Cambridge constituency looks now: 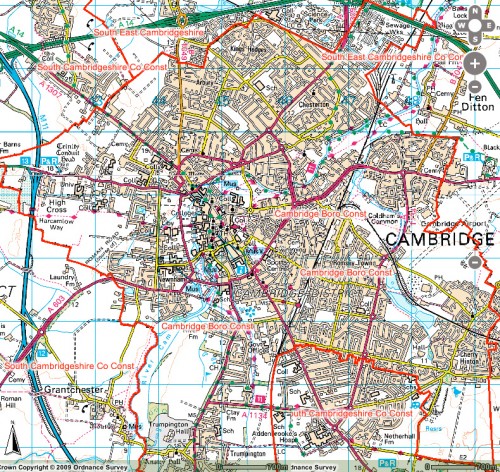 Although the area known as “Queen Edith’s” and around Addenbrookes remains in Cambridgeshire South, Trumpington and the south-west side of the city have all been brought into the Cambridge constituency. And when you look at Cherry Hinton Road, something rather odd has happened: 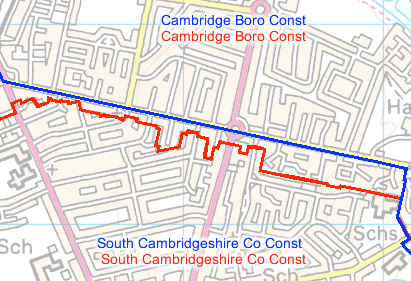 The old boundary, in blue, went down the middle of Cherry Hinton Road, but the new boundary, in red, puts the south side of the road, and all the dead-end roads and estates leading off it, into the Cambridge constituency. This is rather important to me, because I live in one of those roads, Carrick Close, so nowadays I find myself a Cambridge voter, unlike my neighbours in Greystoke Road who find themselves still in Cambridgeshire South: 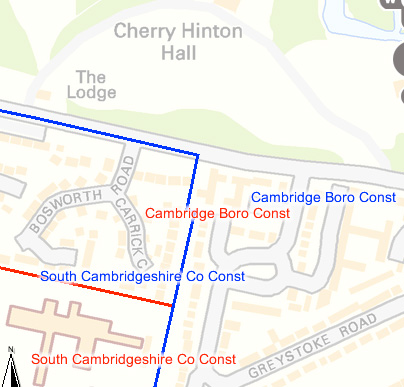 So now we know where we stand, fellow voters of Carrick Close, Bosworth Road and indeed the whole Cambridge parliamentary constituency. Over the next few weeks I’ll be taking a good look at the people who want to be our new member of parliament (because if you didn’t know, the existing one is standing down).

You can find a list of Cambridge City PPCs and links to their websites on my blog. Cambridge City is, indeed, interesting and could go any way – all three major parties have held it over the last 25 years!

Update on my voting intentions!
http://chrisrand.com/writes/index.php/2010/05/03/voting-julian-huppert/

Thanks for doing this. In the run up to the next election, I wanted to see what constituency my Mum and brother, who live near Rock Road, were now in. Don’t know about you, but I think it’s crazy that Trumpington, clearly a village, is part of the Cambridge CITY constituency, while they, who are spitting distance (well, nearly!) of the railway station, are not. Madness! But I guess it’s all a number game.

No problem, Tom. The best political map of Cambridge is this one by Richard Taylor. All of the city council wards shown form the Cambridge parliamentary constituency, with the exception of Queen Edith’s (south, centre, containing Addenbrookes) which is in South Cambridgeshire.