Your prospective MP’s vision for Cambridge 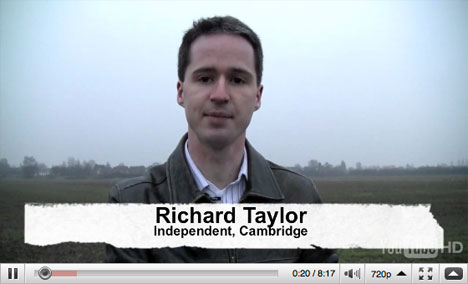 While we all fear for the future of local journalism, Cambridge blogger Richard Taylor has once again shown that nowadays, independent commentators can – and do – provide a better job of covering local politics than the traditional press. His exemplary coverage (see links below) of the recent Vision for Cambridge in 2020 gathering of parliamentary candidates for Cambridge stretches to over 5,000 words, and includes video and his own angle on the debate, which is as impressive as any of the candidates. Meanwhile, all I’ve been able to find from the local newspaper is a single small report which makes the event seem barely more important than the Sudoku.

The next MP’s views on the development of Cambridge is perhaps the most important thing they have to say. The fact that he (and yes, it will be a white, middle-aged he) will be new to parliament, coupled with our increasingly outmoded party political system, means he is unlikely to have much impact on national government. But with Cambridgeshire so badly served by ideologically-opposed city and county councils, perhaps the MP can play a crucial role in banging their heads together. I’m going to vote for the best local candidate, regardless of his political affiliation (and I’m happy to listen to all four parties). If that means I’m also voting for a party I don’t want to see in national government, so be it. I just wish I didn’t have a single vote to cover two such very different things.