Why I’m voting for Julian Huppert 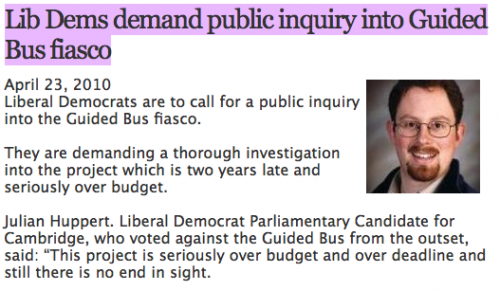 For me, this has been the most interesting election campaign for many years – if not ever. The emergence of a third party nationally; having my house “moved” from a Tory stronghold into a constituency which could go any way; and having a son who’s old enough, at 9, to take a real interest in what’s going on …it’s all added up to a fascinating few weeks.

I’ve generally voted Labour in the past, and was happy to have done so, although Blair’s scary religious crusading would probably finally have pushed me away this time, if he’d still been around. But he isn’t, and I’m glad, because I believe we should vote for the constituency MP we want, and not have our vote swayed by national issues. In 2010, although Cameron gives me the creeps, I don’t have strong enough feelings either way for any of the party leaders to let that influence my decision, which will be based on the people we can actually vote for: the local candidates.

Firstly, I’m dismissing Nick Hillman, the Conservative candidate. He hasn’t been round canvassing (UPDATE: round here), his election literature has been bland to the extreme, and he wouldn’t answer the local and national issues at TheyWorkForYou’s job interview website (UPDATE: Nick has since explained why: see comments). I have no idea if that’s through laziness or whether Conservative candidates have been ordered not to get involved in initiatives which might commit them to something, but either way, cheerio Nick.

Much as I’ve found Old Holborn‘s campaigning extremely amusing, I think we should just say he’s done a great job raising the issues and leave it at that.

In Tony Juniper, Cambridge must have one of the Green Party’s strongest candidates anywhere. I like a lot of things he’s said, but I just get the impression that there’s too much of an extremist lurking in there for my liking.

Daniel Zeichner, for Labour, came to our road with his campaign team, and I appreciated the chance to speak to him. Some of his actions during the campaign have been a little odd though, and the policies he concentrates on in his campaign material are not the ones which concern me the most.

And then there’s Julian Huppert of the Liberal Democrats. Julian starts with a huge advantage, in my books, for having been the most serious opponent of the only local issue which has ever got me to join a campaigning group, and that’s the scandalous Cambridgeshire misGuided Busway. He’s also a scientist, and I think it’s imperative that we get more scientists and engineers into parliament. If Cambridge can’t send one, who can? Finally, although 2005 saw Cambridge return its first Liberal (Democrat) MP for almost 100 years, the MP, David Howarth, is considered to have done an excellent job. Although he’s standing down already, I’m happy that a LibDem MP can be as good for Cambridge as any other party.

So it’s Julian Huppert and the Liberal Democrats for me.

And lest we forget (and we shouldn’t), there’s a local council election going on too, and I’d already decided to vote to re-elect the excellent Stuart Newbold for the Independent Socialist Republic of Cherry Hinton.

sorry to burst your bubble

You are entitled to your opinions but your readers should know that your comment is factually incorrect in at less two big ways. I am out canvassing all the time – no candidate will have spoken to every constituent but just because I have not yet met you does not mean I am not canvassing. Secondly, I have replied to the survey you mention – see my blog post for yesterday. Elections should be about robust debate but it is below the belt to publish unverified thoughts as facts.

Thank you Nick: I apologise if I implied you haven’t been round canvassing at all, which would be absurd – clearly I meant that you hadn’t been round canvassing here. You’re entitled to your explanation (which hadn’t been published when I wrote this) that you’re not convinced it’s valuable “to provide multiple choice answers (plus a sentence or two admittedly) to such massive questions on the future of our country”, but I disagree, and so do all your opposing candidates.

No way am I going round kissing other peoples babies.