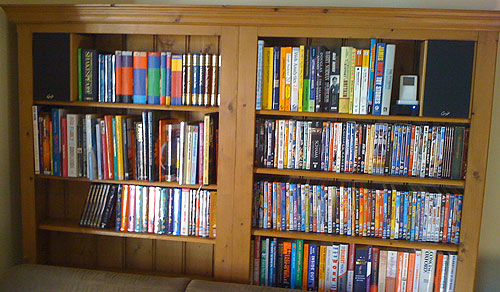 OK, here’s the task: I wanted to build a discreet music system to go in a room with a bookcase, using an old third-generation iPod from about 2004, whose battery had long since died but which worked perfectly sitting in its original dock. The challenge was to make use of two nice Gale speakers, which sat neatly on the bookshelves, rather than buying a brand new (and poorer-sounding) iPod speaker system. Clearly then, the missing link was an amplifier which could sit inconspicuously in the bookcase. With a depth of 170mm, the bookshelf didn’t lend itself to this sort of thing, as hi-fi manufacturers’ idea of “small” tends to refer to a unit’s height, and occasionally width, but almost never depth. In fact, the most shallow amplifier I could find was almost twice as deep as the bookshelf. 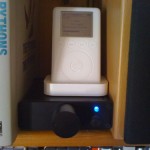 Then, hidden away in a forum posting, I discovered the tiny Bantam amp from Temple Audio in Manchester. It really is small (even smaller than it looks in the pictures) but a bit of homework about the Tripath TA2024c Class T amp inside the unit quickly suggested that it could sound great. And it does. There’s nothing more on the front than a volume control and an on-off switch, and nothing more on the back than phono inputs and speaker terminals. Which, of course, is all that you want.

When the iPod one day decides it’s had enough (or possibly even before), I may connect the little amp to an Airport Express, hidden away round the back, and have all the music on my Mac available using my iPhone as a remote control. Effectively a Sonos system at a fraction of the cost.