How to get the screen locked in position on your iPad 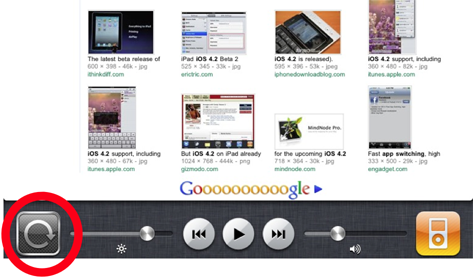 Without even thinking about it, when lying in bed with my iPad, I get the screen into the orientation I like, then flick the little switch on the side to lock it in place. Now I can roll around as much as I like without the screen deciding I’m pointed 90 degrees in the other direction.

Until the new iOS 4.2 update, that is. Magically, or should I say tragically, it’s turned the little switch into a mute button. Why? Sometimes the folks at Apple really should leave things alone. You can mute the iPad just by pressing the “volume down” rocker switch for a second.

Anyway, to get to the point, here’s how you get the screen locked into your desired position in iOS 4.2. Firstly, double-click the home key (the only button on the front of the iPad). This brings up the little app-switching menu. Then, swipe the menu to the right, so you can see what’s hidden to the left of it. There, on the very left, you’ll see the new screen-based orientation lock button. Tap this and you’re done.

How you’re supposed to have worked that one out without someone telling you, I don’t know.

Thank you! This has been driving us crazy.