My Favourite Podcasts of 2010

Podcasts are fantastic. They actually make me want to go to the gym or for a long walk, just so I can catch up with what’s new. Some are from radio programmes, others are podcast exclusives. Here’s my list of the ones I’ve most looked forward to this year.

1. The Word: A Magazine, A Website, A Podcast, A Way Of Life 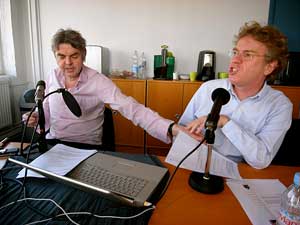 These people really do get it. Production values are perfectly adequate, but the emphasis is on just three or four people talking. And of course, if you’re a bloke of a certain age, almost everything they talk about makes for compulsive listening. The choice of guest can be a bit hit or miss, especially when it’s yet another relatively little known American singer, but when it’s someone who can talk like Hepworth or Ellen, such as Danny Baker or Phil Jupitus, it’s “stop what you’re doing and listen” time.

Three or four blokes talking crap about Ipswich Town every week. What’s not to like? If you think they’ll surely run out of things to say, trust me, they always have to wrap up hurriedly.

They don’t do many, but when they do, the TV Cream Podcasts are as fascinating as you’d expect from the ultimate in TV nerds. The series around the General Election, looking at coverage of past elections, was brilliant (and like most podcasts, is still available).

We long ago lost the independent Danny Baker podcasts, and Stephen Fry seems to have stopped doing them, which is a shame (his Bored of the Dance rant remains a high point for me). But new ones are still springing up. My only regret is that I’ve not yet found a regular comedy podcast which I really enjoy, and I’ve listened to a lot. I’ll keep trying.