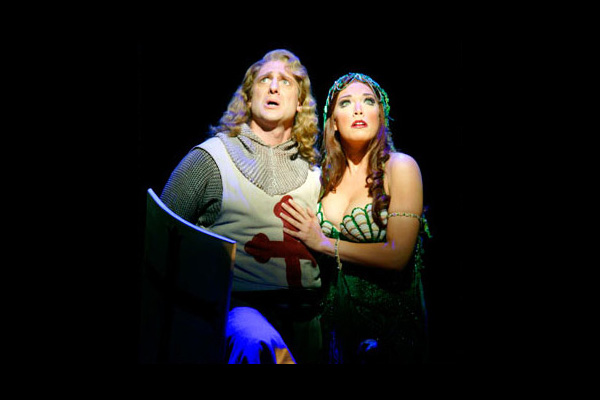 Went to see Spamalot! in Cambridge last week. Very good for a touring production, if perhaps not quite up to the standards set by the considerably higher-budget performances I’d seen in the West End and, ahem, Las Vegas. Anyway, here’s my favourite bit of dialogue. Very Pythonesque. The cast recording CD is great, but doesn’t have any of the dialogue, so we’ll have to hope for a Spamalot! DVD one day if we’re to ever re-live the performance.

Scene: on the back of the stage – a castle. In the front – a man, Dennis, with very dirty clothes, kneeling over the ground, and we can’t see his face. King Arthur and Patsy are riding toward him.

Arthur: Man, sorry. (Point towards the castle) What knight lives at that castle over there?

Arthur: I didn’t know you are called Dennis.

Dennis: Well you didn’t bother to find out, did you?

Arthur: Look, I’m sorry about the old woman thing, but really from behind you looked…

Dennis: What I’m objecting to is you automatically treating me like an inferior.

Arthur: Well I AM king.

Dennis: Oh, king, eh? Very nice. And did you get that? By exploiting the workers! By hanging on to outdated imperialist dogma which perpetuates the social and economic differences in our society! If there’s EVER going to be any progress…

Dennis’s mother (enters the stage and coming toward him): Dennis, there’s a lot of good mud over there. (Notices Arthur and Patsy) Oh, how do you do?

Arthur: How do you do, good lady?

(Dennis’s mother stops, noticing he is a good looking King)

Dennis’s mother: Oh, how do you do? I’m Mrs Galahad, widowed mother of Dennis. (Walks towards Arthur) Now dropped dead last Tuesday, which does leaved me sadly available.

Dennis’s mother: King of the who?

Dennis’s mother: Who are the Britons?

Arthur: Well, we all are. We’re all Britons and I am your king.

Dennis’s mother: I didn’t know we had a king. I thought we were an autonomous collective.

Dennis: You’re fooling yourself. We’re living in a dictatorship, A self-perpetuating autocracy in which the working classes…

Dennis’s mother: There you are, bringing class into it again…

Dennis: That’s what it’s all about. If only…

Arthur: Please, please good people. I am in haste. Who is your lord?

Dennis’s mother: We don’t have a lord.

Dennis: We’re an anarcho-syndicalist commune, we take it in turns to act as a sort of executive officer for the week.

Dennis: But all the decisions of that officer…

Dennis: …must be approved at a bi-weekly meeting by a simple majority in the case of purely internal affairs…

Dennis: …but a two-thirds majority …

Arthur: Be quiet! I order you to be quiet!

Dennis’s mother: Order, eh? Who does he think he is?

Arthur: I am your king!

Dennis’s mother: Well, I didn’t vote for you.

Arthur: You don’t vote for kings.

Dennis’s mother: Well, so how did you become a king, then?

Arthur: Well, I’ll tell you. (Music starts) One day, as I was riding forth from Camelot, I saw a lady in the lake…

Arthur: No, not dead. She was the lady of the lake! She lives in the lake.

Dennis: What, in the water?

(Dennis nods to his mother, pointing at Arthur and then making a sign with his hand which means he thinks Arthur is being drinking)

Arthur (The music continues): She appeared to me, out of the bosom of the water, her arm clad in the purest shimmering samite, held aloft Excalibur, to signify by Divine Providence… (He takes out his sword and rises it high) that I, Arthur, was to carry Excalibur!

Arthur: And that’s why I’m your king.

Dennis (Rises and walking toward Arthur): Listen, strange women lying in ponds, distributing swords is no basis of a system of government! Supreme executive power derives from a mandate from the masses, not from some farcical aquatic ceremony.

Arthur: It’s not an ordinary sword. How many swords do you know, that have their own names?

(Dennis stares at him)
Dennis: You can’t expect to wield supreme executive power just ’cause some watery tart threw a sword at you!

Dennis: If I said I was an Emperor because some moistened bint had lobbed a scimitar at me, people would put me away!

Arthur: You think I would make that up?

Dennis: Soggy old blondes with their backs lying in ponds…

Arthur: Since you don’t believe me, if I prove to you that the lady of the lake exists, will you join my army and enlist as a knight?

Dennis: Oh, sure, if she exists I’ll join any bloody army. For the tooth fairy I’ll join the navy.

Arthur: Very well, watch this. (music starts as he speaks) Oh, lady of the lake, please reveal to this doubting Thomas…

Arthur: Please reveal to this doubting Dennis that you are real.

(Behind disbelieving Dennis and his mother the lake start to light in blue. Dennis doesn’t notice it but his mother does. Then a hole is being opened and out coming the lady of the lake, surrounded by her laker girls. Dennis notices her and running to the side of the stage)

Not wanting to be pedantic, but isn’t the watery tart clad in the purest shimmering samite (heavy silk fabric, often interwoven with gold or silver threads, used for clothing in medieval times), rather than Semite (member of the peoples said in the Bible to be descended from Shem)?

That’s not pedantic, that’s a thoroughly deserved slapping. Correction duly made. Thank you.

Having just seen a terrific performance of Spamalot, I was shocked to learn that Dennis is 27. Dennis is definitely not 27. He has been 37 for over 35 years. He is 37 every single time I watched the movie in the theatre, on my RCA Videodisc, my VHS tape, my DVD and on my Blue Ray. The two copies of the movie script I own also have him at 37. 37, being a prime number, is perfect for Dennis. I was so thrown off balance when 10 years had been cut off his life. With the plague and those who say “Ni” it was quite an accomplishment to reach that age.