And so to the Corn Exchange for Cambridge’s almost annual dose of Pink Floyd tribute goodness. This year things have changed though; instead of the Australian Pink Floyd Show, tonight we see the second gig on the inaugural tour from a “new” band, launched as The British Pink Floyd Show but more recently settling on the name “Brit Floyd”.

Some of the band members – most notably front man Damian Darlington – have previously appeared in the “Australian” lineup, and long-time fans have every excuse for finding it all a bit confusing. But let’s not get hung up about this. These are tribute bands we’re talking about. And as with all tribute bands, the only thing which matters is: do they deliver a suitably authentic experience, now that we’ll never again see the band they’re paying tribute to live in concert?

Of course they do. What did you expect? The Australian Pink Floyd Show (and now Brit Floyd too) have always take the tribute act one giant step further by recreating the unique Pink Floyd stage show, with its memorable visuals. Couple that with a greatest-hits set list that you wouldn’t get from the real band even if they were touring/speaking/alive, and it’s a corkingly good night out for fans.

No, it’s not Dave Gilmour himself studiously picking out those guitar solos, or Roger Waters spitting out those grumpy lyrics (actually it looked more like Nick Clegg and Keith Allen up front). But we don’t come for the original artists; we come for an evening a bit like one with Pink Floyd, and we get it. The musicianship and vocal stylings are extraordinarily good, and more than adequate facsimiles for all but the real musos. In fact – as with most tribute bands – you get something closer to the original album versions than you probably would with the real band, who might well decide to wander off-piste into “live versions”, for better or for worse. 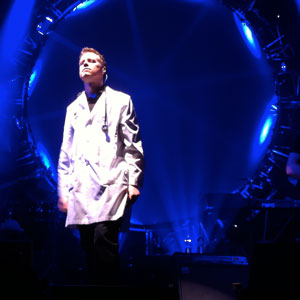 People come to Cambridge Corn Exchange from further afield than normal regional venues, because downstairs is usually standing, exactly as a rock gig should be. So it was a real disappointment when those who’d bought standing tickets were contacted before the gig to be told that “the promoter had decided” it would be seating throughout, and here were replacement seated tickets. I don’t know how many people sent them back, as was offered, but the venue was advertising the event heavily right up to the day, and it wasn’t quite full. Still, they did give us seats right down the front, which was an interesting experience.

There weren’t too many surprises in the set, from the opening “Shine On You Crazy Diamond” through to the “Run Like Hell” encore. We were given a handful of songs from every album from “Meddle” onwards (except the quietly-forgotten “Final Cut”) and I think the only song I’d not heard a tribute Floyd play before was “Pigs”, a relatively mediocre song which came over much better than I expected, once it got going, at least. Not a patch on “Sheep” though, which occupied the same pre-interval slot when I saw them once before, but which – sadly – didn’t get an airing tonight. “Echoes” was terrific, marred only by a stream of people coming back in late from the bar and finishing their conversations, and “Comfortably Numb” was – as ever – spectacular.

So the big question is probably “are Brit Floyd as good as The Australian Pink Floyd Show?” and on this showing, I’d have to say yes. Perhaps the only thing they need to work on is their stage presence and personality: “TAPFS” always seemed to be enjoying themselves, and even had a decent bit of banter between the songs. Brit Floyd were a lot more stiff, and need to chill out. People want great musicianship from the band, but they don’t want the whole thing to be too serious.

Forget Corn Exchange Cambridge, as nice a venue as it is, seen Australian Pink Floyd there before, its too small. Just witnessed the best Floyd music experience ever ALBERT HALL 20th April by Brit Floyd. Fantastic performance, fantastc venue, the BEST.
The performance excelled itself in so much as the music wasn’t album themed, a broad spectrum of tracks from early Barrett to later album selections.
My favourite track of all Floyd tracks is ECHOES and the first time I have seen this performed anywhere.
Added bonus on the venue, a bottle of beer is only a few steps away from your seat!!! These sentiments are expressed by all who went, in my opinion.!!

I saw them the opening night in liverpool and they were fantastic……..trust me go see them, kick back close your eyes and enjoy……

I Quote; “they need to work on their stage presence and personality…Brit Floyd were a lot more stiff, and need to chill out. People want great musicianship from the band, but they don’t want the whole thing to be too serious.”

I must disagree with your above statement regarding `Brit Floyd` as having no stage presence, personality and their performance being stiff. This is a complete fabrication and insult to the whole `Brit Floyd` tribute experience, technical ability and genius of the show. Let me settle a few myths and inform many mislead supporters who still regard `The Australian Pink Floyd Show` as superior to the newly formed `Brit Floyd`.

What you should have been reviewing was the overall experience and not comparing `Brit Floyd` to a now, inferior and limited musical ability such as TAPFS. Which when recently viewed, performed more like mannequins on stage, stumbled through the majority of the performance as though they had just returned on a long hall flight from Australia.
As for the so called musicians, the long standing TAPFS keyboard player, was obviously out of practice when performing on stage. As for Steve Mac another `long past his best` performer was also out of sorts, sounding like his vocals where strained and looking like he desperately required a solution. Could be doing with miming, or possibly he already does this, to save his voice? The whole groups performance was below par, both musically and stage presence. The overall energy of the show was flat, missing something from how I remember them from previous performances. The Visuals where also not as excellent how i remeber them. Since the formation of `Brit Floyd` the original Australian Pink Floyd Show have now sadly parted from CMP Entertainment, and gone under the new management of Zoo Management Ltd.

Now something interesting was discovered several weeks ago when i was looking for the Brit Floyd website. You can try this, and see for yourself. As I typed in `Brit Floyd` on Google, I found the official Brit Floyd website; britfloyd.com, and underneath was the supposed `Brit Floyd Fans`; britfloyd.co.uk. The fans website stating that Brit Floyd where no longer touring. Very interesting indeed. I`m sure CMP Entertainment (Brit Floyd`s current Management & Promoter) would be very interested, if they are not already aware and looking into this. To me it just highlights how much stupidity and downright childish sabotage remains from someone supporting The Australian Pink Floyd.

So the APFS performance is in stark and unparralled contrast to what i witnesed at the Royal Albert Hall back in April this year (2011) when watching `Brit Floyd`. Brit Floyd`s show was truly a magical, intense, enjoyable and memorable experience for me and my wife. Although my wife is not an avid fan of Pink Floyd, she thoroughly enjoyed her evening. There was no comparison with any other Pink Floyd tribute bands. I`m truly sorry to say that TAPFS has seen better days, and although I have fond memories of being what some may describe as an absolute Australian Pink Floyd `hardcore` Fan, its clearly time to move my support to the new and better `Brit Floyd`.

Hi. I have just discovered Brit Floyd the other day. Didn’t know of them. I must admit that they are superior to TAPFS. I saw TAPFS in 2006 and in 2011; they were incredible in 2006, but mediocre in 2011. I have been watching videos of Brit Floyd on YouTube. They have the right vibe and their talent to reproduce Pink Floyd’s sounds and vocals is incredible. Ian Cattell is especially inpressive with his vocals; he truly sounds like Gilmour and Waters. I will see them perform in Boston in March. I am really looking forward to seeing them live. It is great that we Floyd fans have two great tribute bands to look forward to,but Brit Floyd is the better of the two.

I saw both Brit Floyd and the Aussies in 2011 and have heard the recorded output of both units as culled from 2011 performances. Based on that, my honest opinion is that Brit Floyd is currently the better unit and significantly so. To my ears, the musicianship of those in Brit Floyd is sharper, the vocals are better suited to Floyd’s material and the sound reproduction (both live and by way of the recorded output) has greater clarity with much better mixing and overall production.

I’m hoping to see Brit Floyd 2012 at least twice in 2012. I already have a ticket for one gig and the other may well be a virgin visit to the Cambridge Corn Exchange on 2nd June. By contrast, I had no inclination to see the Aussies on their almost concluded 2012 UK tour and have no plans to see the Aussies in the foreseeable future.

Am seeing Brit Floyd in May. Have seen TAPFS about 8 times, from one of their very first gigs in 1997 through to last year. Damian’s absence was noted at last year’s performance, his replacement was too young and had the totally wrong sound and guitar setup to carry off the performances. It also felt to me that TAPFS had gone exactly where the real Pink Floyd ended up – to the point of perfection at the expense of excitement and “live-ness”. I saw the real Pink Floyd in ’86 and ’89 and they were superb. Saw the Division Bell tour in ’94 and I may as well have put a CD on, the performances were to a strict click track, and performed so true to the recordings it stopped feeling like a live gig.

Am hoping by the sounds of things Brit Floyd retain the energy a live show needs. Damian was always the one in TAPFS who seemed to truly enjoy performing and making the songs appear exciting, so have my hopes set high!

Absolute Fantastic Sent shivers down my back just like the OE floyd get tickets to see the band . All the very best Graham.

My god, What is wrong with you people? Maybe you should go and smoke what Pink Floyd used to smoke and chill out a bit.

I saw the show in Copenhagen October 2012 – Brit Floyd delivers a great show and the music is absolutely fantastic !