iTunes Match – what happened when I tried it 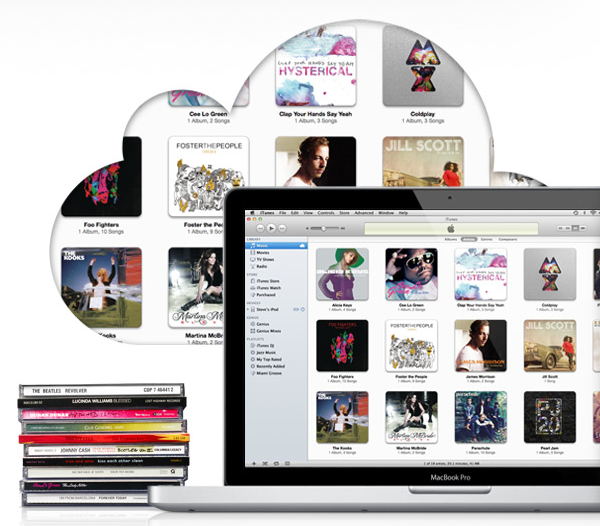 It’s been available for a week or two here in the UK, long enough for any horrible problems to have surfaced (none did), and so it’s time to see what Apple’s iTunes Match is like. My feeling is that although it appears to be a great concept on the surface, it’s far too sophisticated a concept for 95% of iTunes users to get their head around. So although it may be a profitable sideline for Apple (and indeed a necessary one, to see off potential competitors), it’s not the future of music storage, especially at £21.99 a year.

iTunes Match offers three things. Firstly, the chance to store a copy of all of your music on Apple’s servers. I like this, although there are alternative services. I have my iTunes library of 13,000 songs on an independent hard drive, and backing it up is a worry, especially since I divested myself of my entire CD collection last summer. iTunes Match promises to be the straightforward, off-site backup I’ve been meaning to set up for years.

Secondly, iTunes Match is clearly going to make it possible to download anything I own to my iPhone (and other devices) without needing to copy the stuff over from my main computer in advance of wanting to listen to it. My iTunes library is much larger than my iPhone’s storage capacity, and at the moment I just keep my favourite stuff on the iPhone. But music which I get a sudden urge to hear is often not my favourite stuff. That can be annoying. I do subscribe to Spotify, and in many ways this is just giving me access to my own music library in the same way that Spotify gives me access to Spotify’s much larger one (although without the streaming – i.e instant listening – option). However, I own music which Spotify does not offer yet, and plenty that it will never offer, so this seems like a nice add-on.

Finally, iTunes Match will replace poor quality versions of most songs with nice pristine versions from Apple’s library. This is cool in theory, although in practice I have very little which is stored in lower quality than Apple offers.

Right, let’s go. iTunes Match can be found on the “Store” section of iTunes. Buying it is the painless procedure you’d expect from Apple. Then it immediately starts to scan your library, to see what Apple has already got, and what it can’t identify and will therefore need to upload from your computer to their servers. I imagined this initial scan wouldn’t take long, although fully expected the upload of any unique material would take a while, despite a 50Mb/sec internet connection. I was wrong. Even the initial scan took forever. 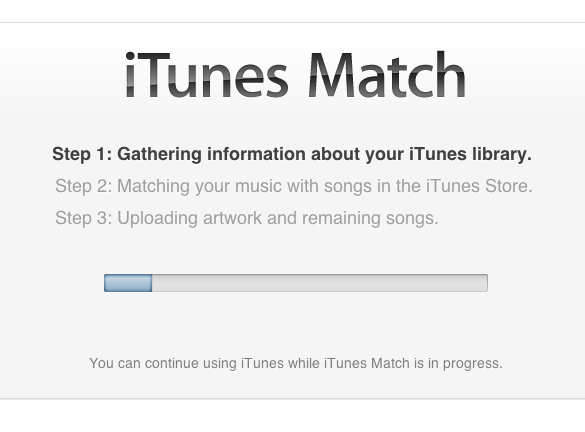 The first stage is called “Gathering information about your iTunes library”. That didn’t sound too hard, but the progress bar moved very slowly indeed. In fact, it took all day, and after about 13 hours, when nearly done, my Mac got to its automatic shutdown time, and promptly quit iTunes. I was horrified, and justifiably so, because on rebooting and restarting the procedure, it seemed to start again (almost) from the beginning. So I left it overnight, and after another 12 hours, I watched as it finally got to the end of that stage …then moved on to stage 2. 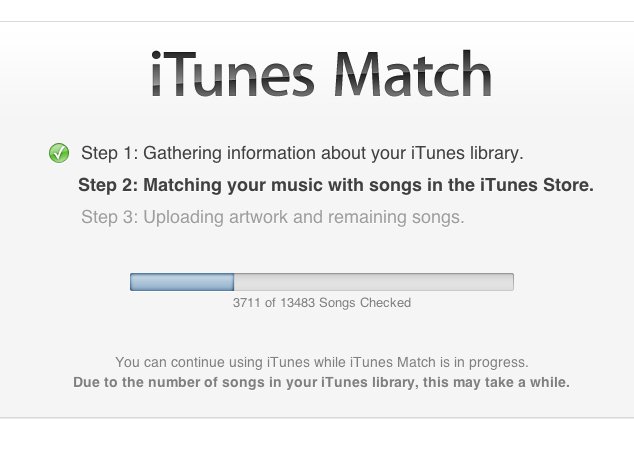 This one was called “Matching your music with songs in the iTunes Store”. It didn’t appear to be any speedier than the first stage, although in the end it only took about 6 hours. Nothing remarkable to report. And so we get to stage 3. 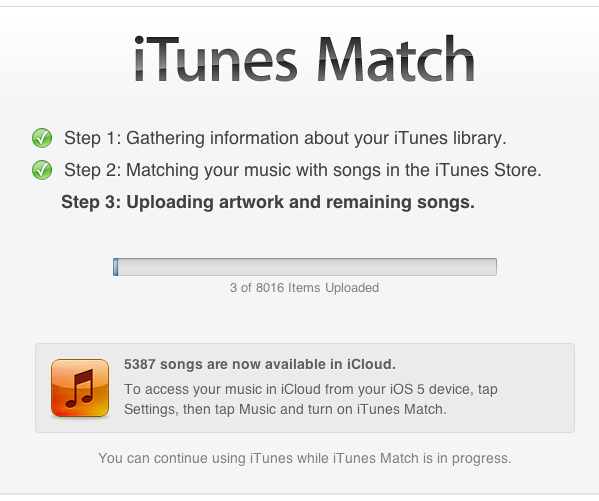 As you can see, 5000 songs (under 40% of my iTunes library) were matched, or at least displayed at this point as being “available in iCloud”. I was a bit disappointed by that, as my musical tastes aren’t that obscure. I expected the classical stuff (not that there was much) not to match, mainly because of the lack of a standard way of titling and tagging classical music. But my collection is 80% rock and pop, and it’s rare that any of the CDs I’d ripped over the years weren’t in the GraceNote database. So what was going on? I watched as the progress bar moved relatively steadily in this third stage, as songs were added to the total “available in iCloud”, and thought it was unexpectedly fast, maybe one per second. Then I realised that it was just the cover art which was being uploaded here, at least to begin with, not the songs. So maybe Apple did have more than 40% of my library which it could match, but just needed the cover art for a lot more of them? I’m not sure why that would be the case.

So I’m guessing that the process goes as follows: a bunch of stuff gets “matched” and is available immediately; a second lot is matched but needs the cover art and becomes available quite quickly; then a third lot needs both the cover art and the track itself to be uploaded.

The odd few ineligible or duplicate songs aren’t of interest, but the 762 “Error” songs (5% of my library) is of more concern. What to make of these? Off to Google we go, and one suggestion, from Macworld, is that the files are corrupted in some subtle way which may still leave them listenable. Interesting. So I grabbed half a dozen AC/DC tracks, created AIFF versions, deleted the originals from both my library and iCloud, and selected “add to iCloud” for the new AIFF versions. The result? The iCloud Status classification next to them changed to “Waiting”. Unfortunately, there it stayed. Following another tip, I selected “Update iTunes Match” (from the “Store” menu), and after a bunch of messages, found that the AC/DC tracks now had “Removed” next to them. Meanwhile, some of the “Error” tracks changed to “Waiting” (even though I hadn’t asked to have anything done to them) and the iTunes window continued to say “Matching your music with songs in the iTunes Store…” After an hour, all the “Error” tracks had changed to “Waiting”, with the exception of the AC/DC ones, which were still “Removed’. So it looks like if you try to do the slightest update, the iTunes Match procedure goes through your entire library again, including all the “Error” songs which will still be in “Error” status because you’ve not touched them. This is all rather tedious. But this wasn’t going to beat me. I selected the AC/DC songs and “Add to iCloud”. And although it took a while, their status changed to “Uploaded” (not “Matched”, mind you). This wasn’t really what I wanted though, because if you remember, these songs are in AIFF format.

So here we are. Not a comprehensive success, with 756 songs formerly marked as “Error” now marked as “Waiting”. There are loads of people with the same problem. However, 95% of my music library has been “Matched” or “Uploaded” and is therefore available on other devices. We’ll see if that turns out to be worth all of the effort.

Hi Chris, 2 years late picking up on this post but my experience of iTunes Match was that I’m so fussy I tried to get all my track information cleansed before I did the upload. This was marginally successful but I also found the upload process very slow and still ended up with some tracks that weren’t either treated as genuine (cough) or recognised. But for less than £2 a month I don’t have to worry about my external hard drive being my only back up.