Installing Windows 8 over XP on a MacBook Pro 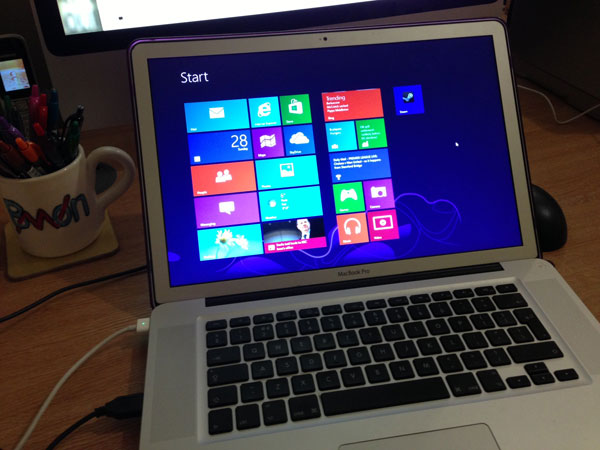 I’ve just successfully (from what I can see) installed Windows 8 on my MacBook Pro, upgrading from the previous Windows XP installation. If you’ve found this page looking for troubleshooting tips, I’m sorry to disappoint you, because I had no troubles whatsoever. But if you’re looking for reassurance that it can be done without any heartache, I can only say that we had no problems here.

My setup was as follows: 2010 MacBook Pro, running Windows XP SP3 on a Boot Camp partition of 150Gb. We’d never upgraded past XP because the Windows installation was almost exclusively used for games, and there’d been nothing to date which had tempted us to drop over £100 on Windows Vista or Windows 7. However, the somewhat keener pricing of Windows 8 made it a different proposition – thank you to Apple, Google and Linux for lowering the bar on the price of operating systems. I always believe in “clean installs” of operating systems (making the PC seem like a brand new one), so I carefully backed up what little data we had on the Windows partition before starting (there was very little, fortunately).

Then I went to Microsoft’s UK store on the Windows XP installation, and downloaded Windows 8 Pro for a very reasonable £24.99. It took quite a while to download, as you’d expect, but almost the only thing I was asked during the process was whether or not this was a “clean install” or whether I wanted to migrate the data from XP. There was a procedure which went through assessing what, on my existing setup, might not be compatible with Windows 8, but the only item on the list which gave me cause for concern was the graphics driver. I didn’t really want to find that Windows 8 would give me a blank screen or something like that; however, I took a chance and decided it didn’t matter. Then it was just a question of following the setup prompts, and that was it; a couple of hours later, I have the nice fresh Windows 8 setup you see above running on my MacBook Pro. I’m quite keen to see how Windows has evolved in the last 11 years.

Update: sorry, completely forgot to mention I had to install the latest drivers too. Go to the Boot Camp Assistant in OS X and create a CD or flash drive with the drivers on. Eject the CD, fire up Windows 8, insert the CD and it will auto-run the installation.

Sounds too easy! Did you wind up with 64 bit Windows or 32 bit? Did activation work okay?

I’m not sure if it’s 32-bit or 64-bit TBH. I should go and look but Jnr is so excited to have his Windows games back I can’t get any time on the computer.

Here’s a further update and tip. I just decided to go through the same procedure as above on a 2007 iMac, with the exception that the iMac didn’t have an older version of Windows installed (indeed, I’d decided to wipe the machine and reinstall OS X too). That made a significant difference, because the cheap Windows 8 version is only an upgrade, so my plan was to install Boot Camp, then Windows XP, then Windows 8 as an upgrade.

So I actually found my old Snow Leopard install disks, wiped the Mac, and installed that very old OS. With that, I could install Windows XP. Then I updated Snow Leopard to Mountain Lion, and Windows XP to Windows 8.