Ryder Cup 2012: I still can’t quite believe I was there 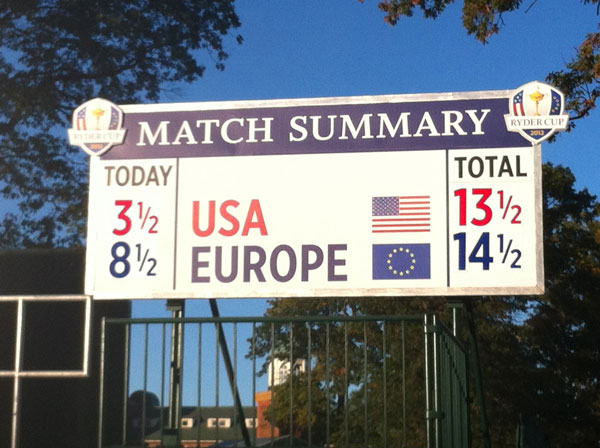 Butch Harmon on Sky TV described it as “the greatest golfing spectacle ever”. Mike Atherton in The Times went even further, saying it might rank as highly in all of sport. It’s now seven days since Team Europe came back from the dead to win the Ryder Cup, and I still can’t believe that I was there.

It started back in June 2011 when my brother sent me an email pointing out that there was to be a random ballot for tickets for the event, and that there was no harm in us trying. Of course, I didn’t get any. Then, a few weeks after being turned down, came a completely unexpected email from the US saying there’d been a second round of the ballot, and I’d not only been given the option of four tickets, but for the whole six days too! The trip was on. As was eleven months of increasingly childlike excitement.

Apart from Tony, Sav and Gibbsy hadn’t needed to be asked twice. The team for the trip to the USA was assembled. And so it was that we found ourselves on the practice tee at Medinah, two days before the tournament proper, watching the world’s best players and wondering just how we’d got this far. 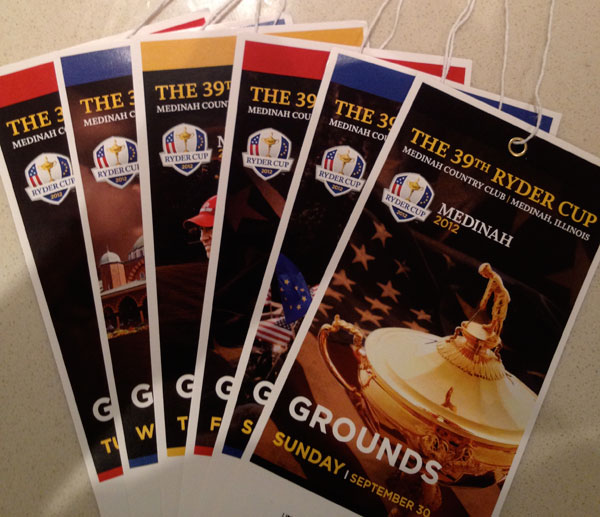 To be honest, the practice days were only useful to scope out the course. There was very little worthwhile golf to see. But on the Friday morning, after a 4:55am start, we knew that one good place to be was the grandstand behind the fourth green …and what a great call that turned out to be. It would be one of the few places on the course which would leave the European team with pleasant memories that day, led by an incredible McIlroy chip-in. By the end of the afternoon, although there’d only been a couple of genuinely disappointing defeats for Europe, there was doom and gloom all round. It wasn’t just that we were 5-3 down, it was the manner of the American victories. They were, quite simply, way too comfortable.

The atmosphere, however, was unforgettable. And although outnumbered hugely, the European fans were magnificent. Curiously, I think it comes from the football culture. The tradition among European sporting crowds is to wait for one or two of the sharper members to come up with a song (or more accurately, a chant), and then all join in, making the crowd seem way more amusing and witty than most of the individuals within it. American crowds tend to just let supporters shout things out, with the result that – sadly – many of the exhortations are ignorant, and some even offensive. The only American group chant tends to be the tedious “U-S-A, U-S-A, U-S-A”, which at this event was quickly put to bed on numerous occasions by small groups of European fans responding with chants like: “One song… You’ve only got one song…”

Needless to say, we had many great singalongs all week, especially on the third tee grandstand on the morning of day two. However, the European fans were outdone for impact during the build-up by the astonishing skywriting display (which we later learned was provided by Paddy Power) which stunned supporters on both sides into silence. Nobody seemed to have seen anything like this before, and it was an amazing start to the day. It was also, unfortunately, one of the highlights, as the Americans increased their advantage. By the halfway point of the tournament, towards the end of the Saturday afternoon, the score was 10-4 to the home team and many people were wondering if it was going to be worth turning up the next day.

The copious amount of beer going down on the course seemed like some consolation at that stage. Then a chink of light shone into the gathering gloom of what had until then been a really hot day. Steve Stricker missed a six-foot putt on the 18th to give Donald and Garcia a win that neither pair probably deserved. Then Ian Poulter stroked in his fifth birdie in a row to give him and McIlroy a storming victory, and the score was “only” 10-6 going into the final day. More importantly, the team and the European fans started to feel a lot better about themselves. No, we probably wouldn’t win – of course we wouldn’t – but at least we might end Sunday getting increasingly close to a respectable score. We tucked into that night’s absurdly unhealthy American cuisine with more gusto than had seemed likely a few hours earlier. 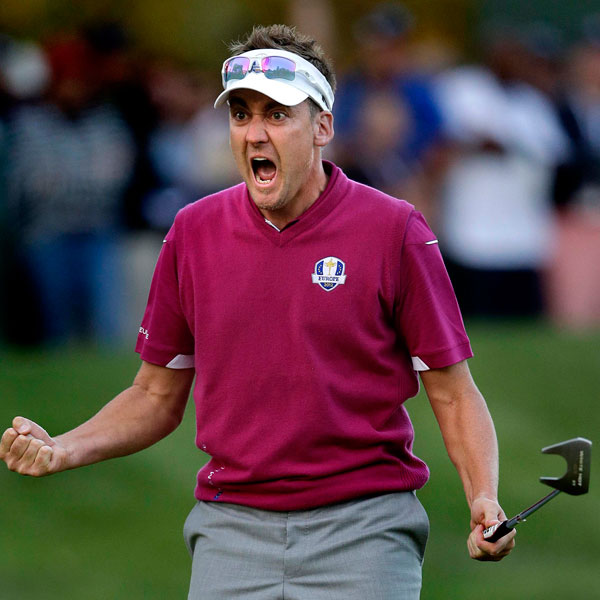 The meal out on Saturday gave us the chance to thank the wonderful Judy Henderson, who we’d had a chance encounter with at the hotel and who had taken us under her wing for the week. Hailing from near Washington, DC, Judy is a massive golf fan who attends tournaments worldwide, often as a volunteer driver, and she offered to take us to and from the course on competition days when she wasn’t working. Meeting her was a delight for all of us in our group. 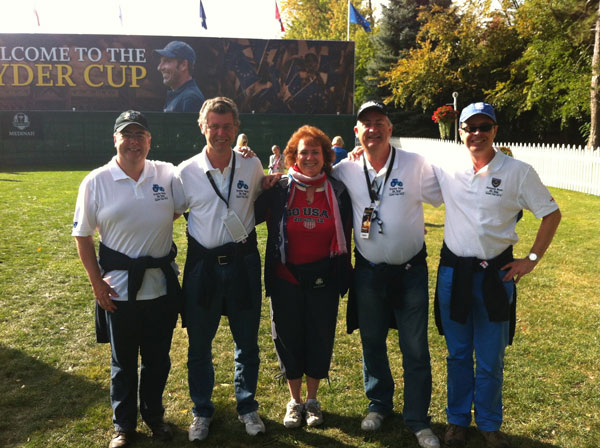 Travelling from the hotel to the Medinah course on the Sunday morning, it’s fair to say that Judy was in brighter spirits than her European passengers. But the day’s events were to surprise everyone. We camped out by the side of the 6th fairway this time, and watched all 12 singles matches come through in increasing incredulity, as Team Europe not only started getting increasingly close to a respectable score, but even gave glimpses that it might even be game on.

The events of the rest of the day are golfing history. We spent the last two hours sitting on a bank by the 13th green, watching a huge video screen across the lake. European supporters suddenly seemed to be in the majority everywhere. When Martin Kaymer’s putt went in, the crowd was ecstatic. I’ve never hugged so many strangers. We immediately piled over to the 18th green, where the party was like nothing I’ve ever experienced. There were songs for every player (“one Belgian golfer, there’s only one Belgian golfer”) and we sang and shouted ourselves hoarse.

I still can’t quite believe I was there. 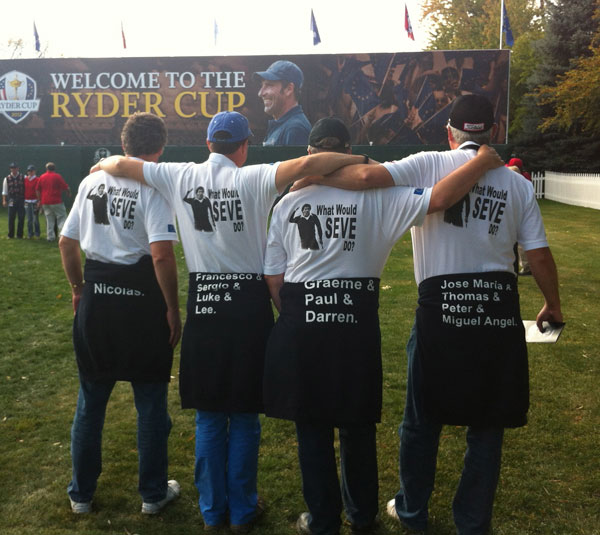 1. Martin Kaymer’s putt to win the match. Of course
2. Singing and partying around the 18th green for the next half-hour
3. Rory McIlroy’s chip-in on the 4th on the Friday
4. The jaw-dropping surprise of first seeing the skywriting aeroplanes
5. Justin Rose’s last three holes to beat Phil Mickelson on the Sunday
6. Phil Mickelson’s sporting response to Justin Rose’s last three holes
7. The atmosphere on the third green grandstand prior to play on the Saturday
8. Ian Poulter’s approach shot to the 18th on the Sunday
9. Ian Poulter’s five-birdie finish on the Saturday
10. Having our shirts photographed by so many Americans

Honourable mention too for American Express, whose cardholders’ tent offered good cider, nice TV screens and (best of all) the only decent toilets on the course. My top sponsor award goes to them.