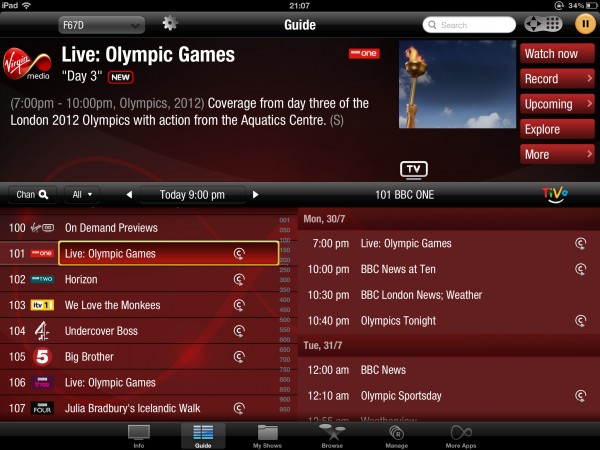 Disclosure: The nice people at Virgin Media sent me a working copy of what looks like the final version of their TV Anywhere iPad app at the end of October 2012, shortly before the public launch date. In return, I was encouraged to review and discuss the app online, which I am happy to do.

So, what is the Virgin Media TV Anywhere iPad app?

This new iPad app is part of Virgin Media’s “TV Anywhere” service, which will eventually (I believe) be a comprehensive integration of services and devices, enabling Virgin Media subscribers to watch TV on a range of platforms, and for the devices to interact with each other. At launch, a few pieces of the jigsaw will be in place. For PCs, there will be a list of live channels available to watch, along with a library of “on demand” content; for the iPad there will be a more limited set of channels, and a feature to control home TiVo boxes. I’ll be looking at the iPad app here.

The elephant in the room

Thanks to the BBC iPlayer, and corresponding apps from the other terrestrial channels, we’re all used to watching live and archived content on the iPad. Sky TV subscribers have just about every other channel the important sports and movie channels available to them through the Sky Go app. So does the Virgin Media TV Anywhere iPad app do the same for Virgin subscribers? No, it doesn’t. Not at launch, anyway. There are 30 live streamed channels available, but that’s it they’re not the big ones which we sports and movie fans would have wished for. Despite what the name of the app suggests, a Sky Go equivalent for iPad users it isn’t. Yet.

What is the Virgin Media TV Anywhere iPad app good for then?

As the screenshot above shows, the main feature is as a substitute for controlling the Virgin TiVo box on your main TV screen. Yes, the Virgin Media TV Anywhere iPad app enables your iPad to become a TV remote control.

Yes, it is really – for now at least. But bear with me, because it’s beautifully done, and after using it for a day or two, you’ll wonder how you ever controlled your TiVo box using a handheld remote. You’ll also get really irritated when you realise someone’s taken the iPad to another room and you’re stuck with the old-school remote control. Just taking the TiVo menus “off screen” is a big advantage. Browse the TV guide, see what you’ve got recorded in “My Shows”, check out programme synopses and all the other stuff the TiVo guide gives you, all without affecting what’s on your TV screen. All that stuff about the cast and crew, or the “if you like this?” links – all become so much more attractive to use on the iPad screen. Searching for stuff is even more of a win, thanks to the iPad’s keyboard. No more arduously trying to type words using numeric buttons.

Visually and ergonomically, it’s been done very well indeed. The iPad’s crisp display adds to the quality feel. Technically, it’s excellent – the response of the system is almost instantaneous. It’s really quite hard to suggest improvements: maybe it’d be nice if the button top right which accesses the forward, reverse and other remote control buttons was a little larger. There are also gesture-based controls, which could be a cool feature, but I haven’t had time to explore this yet. The iPad app can replace the existing Virgin TV Guide app (which was never written properly for the iPad anyway) for programming recordings on the TiVo box. This capability is available even when you’re away from your home network.

I’m having more thoughts all the time about the Virgin Media TV Anywhere iPad app, so check back for updates. I’ll attempt to respond to any of your questions or comments below, or contact me on Twitter at @cherryhintonblu.

Sky Go has 42 channels, 31 on mobile yet Sky TV has over 310 channels so stop talking through your arse.

Thanks for your pithy correction, Mel. I’ve amended things appropriately.

The ‘remote control’ function is actually the one I will be using the least.

You say “Is that it? Yes, it is really.” But it’s not. You can also do almost everything* that you can do with the Tivo when you’re not watching something; eg find programmes through search and browse, re-order Series Links, “info” on actors and the like. And you can do all that *whilst watching something*!!!

* You can set a wishlist but can’t edit or view upcoming, etc.

Thanks Carl, I didn’t intend to downplay that side of things. Indeed, as I mentioned, these features of the TiVo guide are actually more attractive to use on the iPad screen. They’re a pleasure to use, as well as being more convenient.

When I say that the app is a remote control, I mean that it does the same things which the remote control does – i.e. controls all the TiVo’s functions. Apologies if I gave the impression that it’s a glorified on-off switch, which plainly isn’t the case.

Chris is it just me or people just being assholes with their unhelpful replies? Do you know when the app is going to be released?

They haven’t said, Daniel, but it must be imminent, because I understand that we’ve got the final version of the app, so there’s no reason to hold back.

Hi Chris, just found your blog when googling for news of the TiVo Ipad app (nice to see what you’ve been up to since the 80s!). Thanks for the useful update on the app.

I switched to Virgin from Sky. I too, believed the hype. This app is RUBBISH. It does nothing. I counted about 5 channels I could watch, 3 of those seem to be MTV type channels.
When I tried to view 1 of the 2 remaining channels… “this type of media can not be streamed on this device”……….my device is….iPhone5. FAIL!

Hi Chris, Just read your blog and in it you’ve said that it is basically a TiVo remote……Is there any chance Virgin will be launching and update so we can watch TVanywhere on Ipad’s and Iphones, also will they be realeasing an app for Android??

Hi Kevin: it’s Virgin’s entry into “TV on the iPad” but as you can see from the reports, there are mixed views on the limited number of channels they’re permitted to distribute. Don’t know about an iPhone or Android version of the iPad app.

Hi I’m currently a sky customer but thinking about switching to virgin, I currently watch a lot of skysports on my ipad does virgin offer this service if I have all the channels and if so is is any good, seen a lot of posts saying the tv anywhere app is rubbish and constantly crashes.

Hi Stuart – no, Sky Sports is not available on this app.

Hi I currently have a first generation iPad. Will the App work on that. I am a fully subscribed customer to Virgin Media. I tried downloading but cant get passed the sign on screen, keeps telling me my user and password are incorrect. By the way I am not using a tivo box, does it only work on Tivo?

Hi, will we be able to get all the channels on virgin anywhere one day?

What a rubbish app. Why on earth can’t you watch your content on the iPad like you can with Sky or even iPlayer for that matter. I cannot believe how much I’m missing Sky Go on my iPad.

All BBC channels are missing from my iPad TV Anywhere Programme Guide. Previously BBC channels were available. The TiVo remote works normally for all channels. Any ideas?

So I haven’t got my TiVo box on my home network, but I’m not really bothered about the remote feature.
Watching live channels is also nice.
Honestly though, with out an on demand feature (like the pc/Mac version has) I’m not too hot for this app.
Why on earth can I not watch on demand shows on this app!
…unless I’m being stupid and can’t figure out how?

the first thing I tried to do when I brought the remote symbolically to screen was adjust the volume. Lost interest after this basic requirement failed to be displayed. Oh well back to the trusty remote….

All this stuff about Virgin TV App TV Anywhere. Is mis-advertising. It s not tv anywhere because you have to be connected to your home network. I tried to use the app for the first time as I had to go down london for work. I wanted to watch my programme, could ?! NO.

it’s false advertising and I’m being charged for the privilege of a TIVO box. I’m thinking of changing to SKY whilst they may charge a little more. The idea of being able to watch any of the channels where ever you are in the country is a bonus which I don’t mind paying extra for.

I have Virgin’s Tivo box and I am new to TV Anywhere, I use it only on my PC but find on some channel
I get the : Programme is not available on this platform : eh?
What does this mean?………….Thanks

I have just changed from Sky to Virgin and was told that Virgin had the equivilant of Sky Go. How stupid do I feel now I’ve just got a larger version of the remote control?
Not too impressed with Virgin so far anyway but have another 16 months to put up with it before I can change back…oh well, maybe it will grow on me?