How to organise a local council hustings event 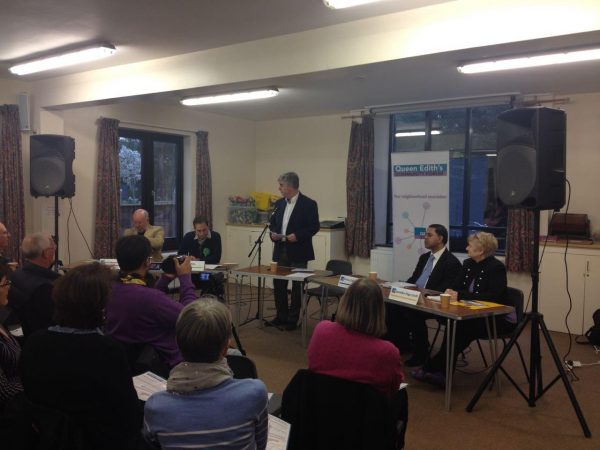 Earlier this year I was part of a small group which organised a hustings event for a local council election here in Cambridge. We think it was a great success, and a real asset to local democracy. One or two people came along from other parts of the city and told us they’d love to hold similar events in their parts of the city. I promised I’d write up what we did, if for no other reason than to demonstrate how straightforward the process is. I hope it might inspire you to do the same, wherever you live. There’s a video of our event down the page.

If you do hold your own hustings event, let me know how it went in the comments!

What is a Hustings? Why organise one?

Quite simply, it’s a public meeting before an election, where all the candidates come along to pitch to the voters in person. We think it offers two great things to us as voters:

Who can organise a Hustings?

Anybody! Naturally, if you have a residents’ association or something similar to back the event, it’s a big help. But any small group of concerned individuals can easily make it happen.

Here’s our experience. You need to get going about 6 to 8 weeks before the election. So if it’s an early May election, I’d suggest starting to plan the event in early March. You can contact the candidates to let them know when you’re holding the event, and give them information about it, as soon as they’re all declared. The closing date for nominations is 19 working days before the election (four weeks), which is normally a Friday evening. Obviously the organising council will have that information for you.

Before then you can get working on the following:

You can leave the publicity until after the nomination deadline day, as most people aren’t interested in putting dates in their diaries more than two or three weeks ahead. But you might have a community newsletter or other publicity outlet which comes out before nomination day, so check for that.

The date of the event can be set well in advance. We’d suggest about halfway between the close of nominations and election day, so late April for an early-May election. Don’t worry about the candidates’ availability; they should have cleared their social and professional lives for the duration of the four weeks leading up to the election, so they’ll fit in with what you’ve organised.

We had four candidates standing in our election, and made a point of visiting them all personally to confirm their details and to tell them about the event’s format (“It’s a bit like Question Time, you’ll be in front of the audience, the same questions will be put to all of you, and that’s it”). The information we gathered was used to put together a preview document (see below).

Your chosen venue may need a sound system. If you’re expecting more than about 20 people (we managed to get nearly 80), it’s unfair on the candidates and the audience to expect them to shout. We hired a fantastic setup (and an operator!) through a community radio station. If you can find someone who’ll video the event, many people will appreciate that too.

A nice optional extra is to put together an online or printed guide to the election. We did both. Here’s our online guide, and here’s our printed handout. We were lucky in having a volunteer to do both, but it’s not a make-or-break thing.

For the hustings night itself, we needed a chairperson (it was yours truly, in our case) and some volunteers to provide refreshments. Someone needs to put together a list of questions for the candidates, and we let them have sight of these a week before the event. We decided that the hustings wasn’t a test of who could think on their feet the fastest, it was a chance for the candidates to give a considered pitch.

If each candidate gets just 2 minutes to answer a question, and you have four candidates, that probably means each question will last up to 10 minutes. If you have a one-hour event and want to allow the audience to put their own questions, as well as a summary from each candidate, you’ll only need about three or four questions.

What are the costs?

We had four areas of expenditure. The venue hire was £50 and the sound system was a further £50. We spent about £30 on our printed leaflets (online digital printers like Solopress can do these overnight, all you need is someone who’s proficient in laying out the document on a computer). Finally, we provided refreshments for everyone …but were lucky enough to have a generous local Co-op supermarket who helped us out with this.

You may find that people attending the event are more appreciative than you may think. We took the decision to ask – on the night – for a small, optional contribution on the way out, and covered our costs for the evening almost exactly.

Was it worth it?

About 50% of responders indicated that they were “fairly certain of who they’d vote for beforehand, and they hadn’t changed their mind” (although bear in mind this will have included the sprinkling of existing councillors and party activists present). More interestingly, 25% said they “hadn’t known who to vote for but now did”, and a further 20% said they’d “changed their mind based on the candidates’ performance at the event”. That was the best news of all.

For this, I point you towards the write-up of the evening on my local blog. This gives links to the various videos of the evening, but if you’d just like to get a flavour of how it worked, here’s the opening statement from the first candidate.

On the night, we were as encouraging and courteous as possible to the candidates. It was always quite possible that some of them had never spoken in public before. We wanted to help them present their case as clearly as possible to the audience. We hope we achieved that.

Do click through to the write-up of the evening to watch more.

6 to 8 weeks before the election:
Initial planning. Set a date for the event about 1-2 weeks before the election, book a venue and a sound system if necessary. Discuss costs and funding. Start to organise volunteers for a chairperson, and (if they’re required) someone to video the event, someone to produce a leaflet and someone to provide and manage refreshments. Discuss publicity: local newsletters, websites, newspapers, radio; Facebook and Twitter opportunities; posters; schools and colleges; residents associations and anyone with a mailing list! Get contact details of local political parties, and collect literature from candidates (it contains their contact details!). Find out from the council the date and time when the official list of candidates will be published, and where you’ll be able to find it.

4 weeks before the election (after nomination closing day):
Get the official list of candidates from the council. Contact candidates with details of the event. Get confirmation from each that they’ve received the details. Finalise the questions to be asked. Get information from the candidates if you’re creating any printed or online guide to the election, including photographs if required. Launch the event publicity campaign! Ensure local parties publicise to their members. Prepare door-to-door leaflet drop if part of publicity plan.

1 week before the Hustings event:
Contact candidates with details of the questions to be asked. Produce any printed or online guide to the election. Confirm availability of venue, video person, sound system, refreshments. Prepare signs etc for the event, and name cards for the candidates and chairperson.

Further reading:
Hustings events from the Electoral Commission
How to organise a hustings by 38 Degrees

[…] (to me) blogger Chris Rand wrote a guide at http://chrisrand.com/writes/2016/09/organise-local-council-hustings-event/ aimed at those of you looking to organise one for local council […]

What do you think of the candidates standing in your area? – A dragon’s best friend | Public Sector Blogs

[…] Background reading: How to organise a local hustings – by Chris Rand […]

This looks interesting. How do you decide what questions to ask?

We start off with a couple of our own, which we’ve given to the candidates in advance, to let them introduce themselves. “Why are you standing?”? “What do you think of the area?”, That sorry of thing. Then we move on to public questions. We’ve found that questions from the floor (BBC Question Time style) aren’t a good idea. Too many people want to make points from the floor, or their questions are simply bad, and answering them doesn’t achieve much. A better idea is to allow people to write questions on cards as they come in, and then a moderator’s assistant can select ones from these. Overall it can easily take 20 minutes for one question to be asked and answered, so with closing statements, there’s not time for that many questions!

Hello Chris,
I want to run a local hurstings in my local town of Eastleigh, Hampshire on behalf of Extection Rebellion.
The layout and plan that you have given is really well put together.

The only problem I can see is when to have it as it is in December and I guess people are less likely to come out in the dark evenings. What would you suggest a good time to have it. eg Saturday afternoon or stick to a evening.
Kind regards Frances

Good question: we’ve only ever run local Community meetings of any sort in the evenings, and we haven’t found too diminished a turnout in the winter months. I think you might struggle to get the candidates to attend during the daytime, which has to be their prime canvassing time in the winter.