Another year, another Cambridge Folk Festival – our 27th in succession, by current reckoning. Many people have been going far longer: it really is an institution. I’m not a huge folk music fan, just a local resident who loves the whole experience. However, that’s not unusual. I reckon the real folk fans at the event have probably been in a minority for a long time now. It doesn’t matter – it’s a fantastic crowd of all ages. Quite a few changes took place this year, by Cambridge Folk Festival standards, and there’s plenty to talk about.

Our period as festival regulars has coincided almost exactly with organiser Eddie Barcan’s time here. However, last autumn Eddie left to “move on to new opportunities” due to “strategic developments within Cambridge Live”. It’s quite clear that Eddie’s experience would be hard to replace, and I think it showed in places over the weekend. The event normally appears to run like clockwork for most of the 14,000 attendees, but it was a bit frayed at the edges this year.

Examples include having to queue up for 30 minutes on Thursday evening just to get in (that’s never happened before); observing some vocal disagreements between stage staff; technical problems with one or two acts, such as Shirley Collins; and most obviously, tickets still being available up to and over the weekend. I can’t remember the event not being sold out before. None of this spoiled our enjoyment of the event, but all of them make me worry slightly. 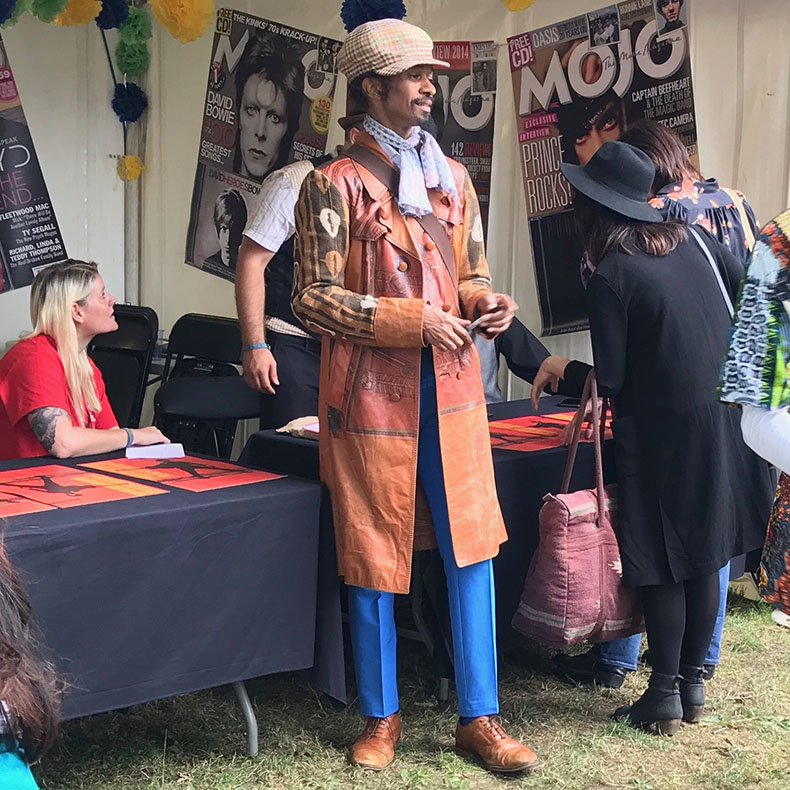 Then there was the programming. This year saw the introduction of a ‘guest curator’, Jon Boden. I don’t know how much this was for show, and how much influence Jon had over the choice of acts and the scheduling. For general music fans – and we’re probably the majority of attendees – it wasn’t the most exciting lineup, and the failure to sell out the event wasn’t that surprising to me. That said, we often moan about how much better it was in the past, but if you look back over previous lineups, many of them are a lot more underwhelming than many of us care to remember. In the end, it’s usually more about the unknown discoveries we make than the biggest names. However it was disappointing to have a near absence of the ‘festival darlings’ which we expect to see. Acts like The Unthanks, The Saw Doctors, Kate Rusby and Show Of Hands are all very much alive and well, but weren’t here. It left an unfilled hole.

I heard that there’d been a – perhaps slightly misguided – plan to promote Friday as a “Ladies Day”, but this had been quietly put on the back burner, while leaving the predominantly female lineup in place. Unfortunately we ended up with one of the weakest single-day lineups I can ever remember (nothing to do with it being female per se), maybe because the organisers had only given themselves half of the choice of acts which they might have had otherwise. Friday’s lineup was all anybody seemed to be talking about on Saturday.

Of course there were some wonderful moments on the Friday (step forward Amelia Coburn!), but that night should be – and normally is – a joyous occasion. Let’s just say that Shirley Collins deserved a more appropriate slot. 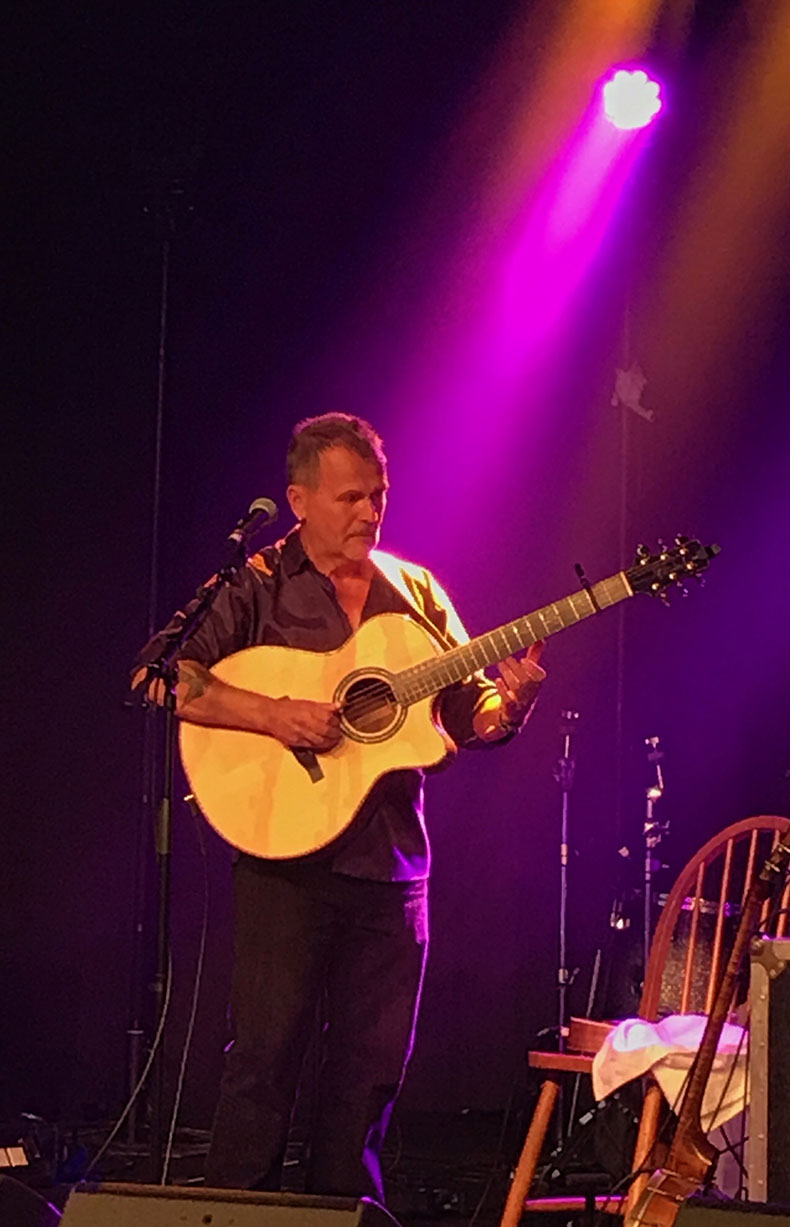 And when did the festival decide to stop giving more than one performance to each act? One of the best things about acts having a stage 1 slot on Saturday and a stage 2 slot on Sunday was that if they clashed with someone else you liked, it wasn’t so important. You always had another chance. This year I’m not sure if anyone got two goes on the main stages, which gave us some excruciating decisions to make: Jon Boden & The Remnant Kings or Lau? Jake Bugg or Martin Simpson? Jake Isaac or Oysterband? These were all acts which featured prominently in the festival promotion and who were then pitched against each other. I wasn’t the only one getting a bit grumpy about this. And don’t get me started on the acts which were on too early in the day (Fantastic Negrito) or on too small a stage (Jake Isaac).

There were some notable successes though. The new opened-up food area was, for everyone I spoke to, a triumph. It was sad that the rain probably dampened the food vendors’ profits hugely, but the new arrangement was really conducive to displaying them better and getting us to buy more. Wonderful too to see classy local favourites like Guerrilla Kitchen and Chip Chip Hooray at the festival.

Above all, the quality of the music overcame the distractions and the poor weather. Here was my annual post-festival tweet of my top acts. I suspect Admiral Fallow and Lau would have been in there had I been able to see them.

Oh, and one more message to the organisers: a programme which doesn’t fit in your pocket? What were you thinking?

I’d love to hear other festival attendees’ thoughts below. 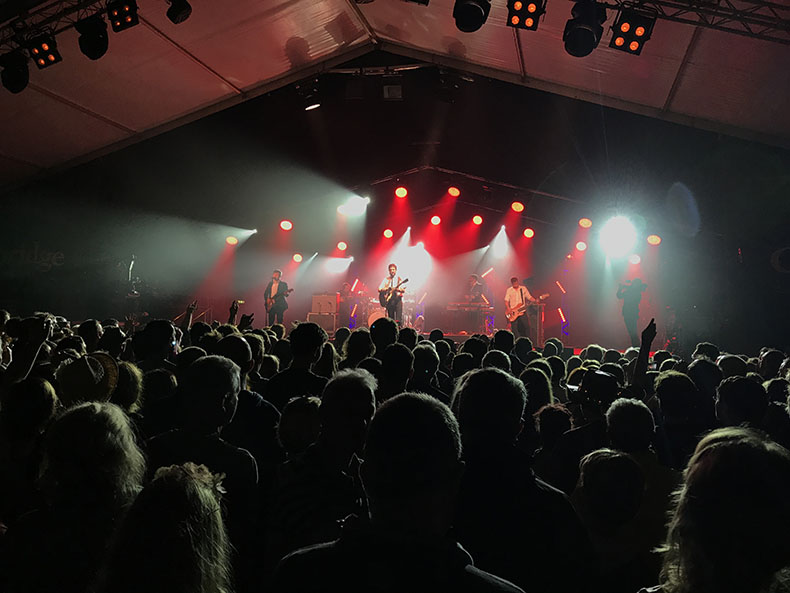 Just read, a little late! I agree so wholeheartedly with your comments, particularly with respect to the quality of the acts (even the quality of the amplification) on Friday evening, and throughout. We looked back with envy over past Festival lineups….. After over 40 years of regular attendance we are rethinking our plans for next year. We certainky won’t be buying full Weekend tickets…..too expensive given the overall quality of the event.

The ticket selling strategy was very flawed. Were there,perhaps, a lot of reserved Corporate tickets,which were later released? The Festival was, allegedly, sold out if you tried to buy a Saturday ticket in about May (as our friends did) and yet tickets for any day, plus full weekend, were being offered, by CambridgeLive, to certain local companies, at 20% discount, in mid July.

Am also disquieted by the path the festival is taking under CLT. I wasn’t too disappointed by the lack of name acts last year but some of the changes (not irreversible) smacked of the new body trying to muster their mark. Programme size being one as mentioned and the Club Tent queue being entry and exit on the same side which was a total mess. I bumped into a couple of organisers and had a chat but they immediately struck me as not being in sync with the type of audience.

The prices this year are suddenly out of my reach and it also depressed me that in trying to get ticket prices that I inadvertently allow myself to be redirected to a secondary site that was telling me all sorts of nonsense. The sort of thing that wouldn’t have happened previously.