My most shared Tweets of all time

I was nerdy enough to get on Twitter really early on (August 2007), as @CherryHintonBlu. Quite a few even more curious people had been there before me, as I was only user ID number 8,015,922. Here’s my first Tweet (Twitter will now show it under the username I adopted at a later date, @ChrisRandWrites):

Staring at my Mac with one eye and my PC with the other, trying to sort out our web sites. As usual.

Here’s the earliest screenshot I can find from the Wayback Machine, from a couple of months later. I’d made 11 tweets and had an impressive 7 followers: 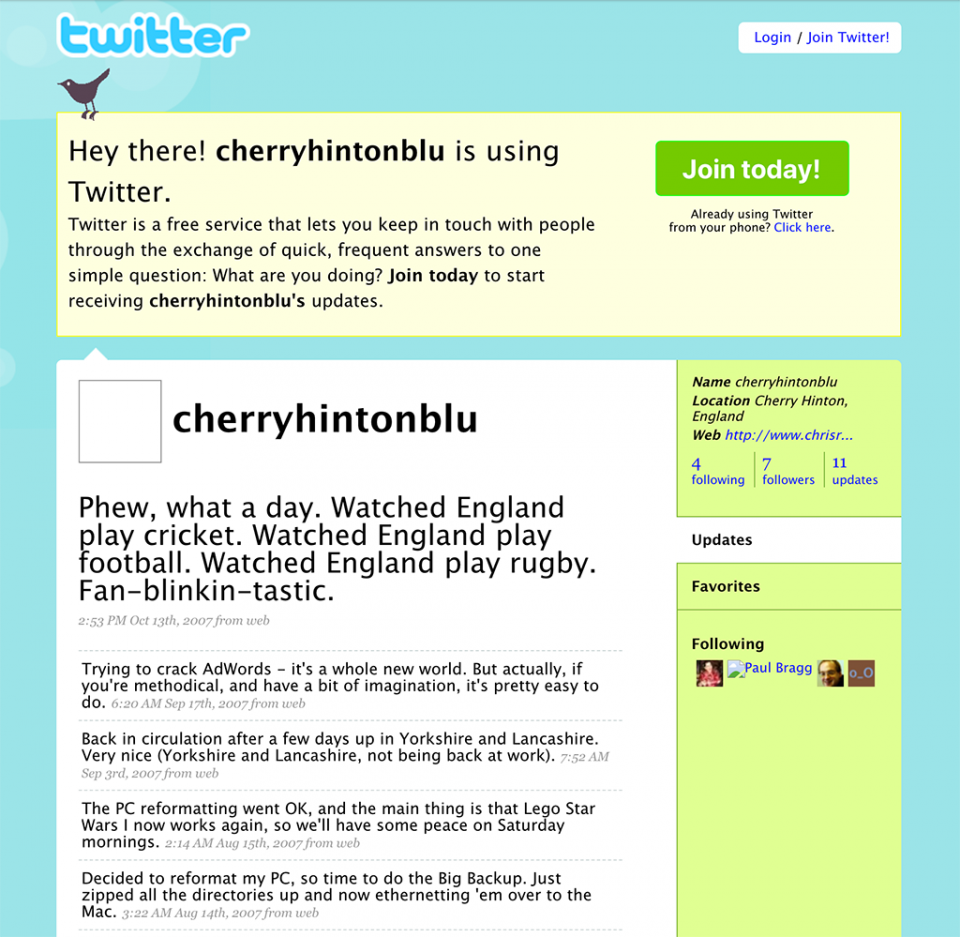 My tweets and followers have increased steadily, but in the past year or so something’s changed, in that some Tweets have got ‘retweet’ and ‘like’ numbers which I’d never have dreamed possible once upon a time. This hasn’t corresponded with a sudden increase in my followers (or Twitter users in general), so I think it may indicate an increased culture of retweeting and liking stuff. Anyway, here are the most liked Tweets I can find on my timeline. Early in 2018, Twitter stopped showing the number of retweets when you embed Tweets, but you can see the likes (the little heart symbol) and get a decent idea of popularity.

This Tweet was something I thought up late at night about this news story, and a lot of people seemed to find it amusing.

DEAR GRAYLING SIR.
MY NAME IS PRINCE SEABORNE OF NIGERIA. I HAVE RECENTLY RECEIVED MANY FINE SHIPS AND WISH TO SHARE THEM. IF YOU CAN SEND £13,800,000 BY BANK TRANSFER, THIS WILL RELEASE THE SHIPS. THE TRANSACTION IS 100% SAFE. PLEASE RESPOND URGENTLY.

When our local newspaper put one of the all-time great howlers on its front page, my Tweet of it was the one which took off. I assume more people will have seen it when Piers Morgan stole the photo and posted it to his millions of followers without credit, but hey ho, my numbers were good by my standards:

Wow. It’s real. This’ll be featured in newspaper sub-editing courses for years. And available at all good newsagents near you today, folks. pic.twitter.com/JS8YpuedVW

In May 2018, one of our local councils was dramatically – and unexpectedly – taken by the Liberal Democrats, and some graphics I quickly knocked up got a lot of ‘social media traction’ – here’s an example:

BREAKING: From a distant second with under a quarter of the seats on South Cambs District Council, the Lib Dems have won an outright majority. Incredible. @SouthCambs pic.twitter.com/OICGBB7Zdj

On the night of the referendum on EU membership in 2016, this off-the-cuff comment went around the block a few times:

Bloody hell. City analyst saying they’ve modelled in the possibility of a 40% fall in sterling tomorrow if we vote leave. That’s 40%.

Finally, and also on a Brexit-related theme, this Photoshop image which I made also did well, although more by judiciously placing it as a reply to someone with a lot more followers than me (a tip I’d give to anyone with something good, wanting to get it seen more widely):